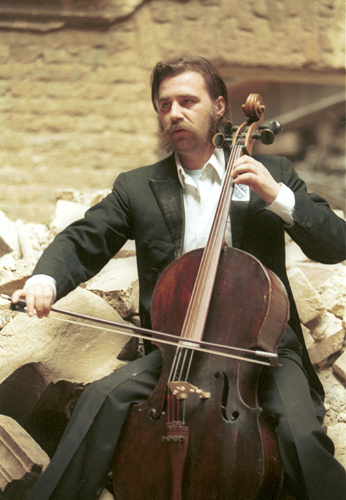 Vedran Smailovic playing in the destroyed building of the National Library in Sarajevo, 1992. Photo by Mikhail Evstafiev

Radovan Karadzic was in the news a few months ago, appearing on TV screens as an old and tired man. I would not have paid much attention to him, if I hadn’t  recently read a novel based on the siege of Sarajevo in Bosnia and Herzegovina. Radovan, b.1945, a Bosnian Serb,  was the president of the Republic of Srpska from1992-96 during the Bosnian war. He wanted to unify Srpska with Serbia.Sarajevo was part of the struggle.

Sarajevo, located in a valley through which the Miljacka river flows, has a chequered history. It became a city under the Ottomans in the 15th century, though it has ancient settlements, the neolithic Butmir culture, with flint tools and pottery. This was followed by the Illyrian culture, and later there was Roman occupation. In the Middle Ages it was part of the province of Vrhbosna in the Bosnian kingdom. In 1875 Austria-Hungary took over the region, though technically it remained under the Ottomans. In 1885 it was so advanced, that it had an electric tram network, only the second city in the world to have one, after San Francisco. In 1914 the archduke of Austria was assassinated here, and the First World War started. After this, it became part of Yugoslavia. In World War II it was captured by Germany and formed part of Utashe’s independent state of Croatia. After the war, it was again part of Yugoslavia, as the capital of the Socialist Republic of Bosnia and Herzegovina. Bosnia and Herzegovina declared independence from Yugoslavia, on 3 March 1992, but the Serbs did not accept this. The  Bosnian Serbs wanted a new state, Republika Sprska, that would include some Bosnian areas. At first the Yugoslav army besieged Sarajevo, and then Sprska forces from 5 April 1992 to 29 February 1996. A siege force of about 13,000 encircled the city on the hills, and attacked with artillery, tanks and guns. Though there were 70,000 Bosnian troops in the city, they were poorly equipped. Snipers on the hills shot people on the streets.

The siege of Sarajevo was possibly the longest siege of modern times. Sarajevo at that time was a city of about 500,000 people, but several were killed and 70,000 Sarajevan Serbs left and went to Republika Sprska. According to UN estimates, almost 11,541 people were killed, and 56,000 wounded.  Fifteen hundred children were among those dead and 15,000 among the injured. Hundreds of shells hit the city every day and in one case, 22 July 1993, there were 3777. Finding ways to survive, ‘Sarajevo Roses’ was a poetic name given to craters created by shells.Ten thousand apartments were destroyed, and thousands more damaged.

There are more than 20 books, films, plays, and songs on the siege, as well as two video games. How accurate are these?  And is accuracy important in fiction?

The Cellist of Sarajevo by Stephen Galloway dramatizes a real incident that took place. According to the book, on the afternoon of 27 May 1992, mortar shells hit a group of people waiting to buy bread behind the market on Vase Miskina. Twenty-two people were killed and more than 70 injured. To honour the dead, a well-known cellist of the city, came to the exact spot at the same time for 22 days, and played on his cello. Every day he played the same piece, Albinoni’s Adagio in G minor. There were snipers on the hills, and the cellist could have been killed at any time, but he played on. The book is quite gripping, revealing the life of ordinary people living under a terrible siege. Water, power, health care, and life itself were all problematic.

The real cellist, Vedran Smailovic did not appreciate the book. He said he did not play for 22 days, but every day for two years, at different times and in different places. He was not so crazy that he would go to the same place every day. He was also annoyed that the writer never met him or asked him his version of events.

In real life, Smailovic, playing his cello in the midst of ruined buildings, became a symbol for the whole world. Impressed, Joan Baez joined him one day. But the man himself did not want publicity. He left Sarajevo in December 1993 and moved to northern Ireland.  He lives in Warrenpoint in an attic flat overlooking Carlingford Lough, where he composes music and plays chess.

Vedran was the focus of another book too, this time for children. But in this case, the author, Elizabeth Wellburn, actually worked with Vedran, and consulted him, producing a more authentic account, Echoes from the Square. This fictionalized story of Vedran, has an added character of a young boy, and was published in 1998. The boy’s life is almost destroyed by the war, but hearing Vedran playing every day gives him courage. This picture book illustrated by Deryk Houston,  is available as an audio book on youtube.

History records massacres at Sarajevo worse than that described in the book. In the Markale marketplace massacre on 5 February 1994, 68 civilians were killed and 200 wounded; there was a second Markale massacre on 28 August, with 37 killed, 90 wounded. Others provided records of the siege. There was no light, no gas, no water, no schools, phones, transport or industry. ‘We learned to live by candlelight again,’said Resad Tribonj.

A memorial of 521 children killed was erected on 10 May 2009. The case of 500 more children was being investigated.

Radovan Karadzic and Ratko Mladic were charged with war crimes in 1996.

And to get back to the question of whether accuracy is important in historical fiction. Steven Galloway’s account of the cellist was not accurate. Even so, it led me to read more about him, and about that terrible siege, and  about Sarajevo itself. But would a more accurate portrayal have detracted from the book? I don’t think so–in fact it would have improved it. To know what the cellist thought, how he chose the different places in which to play every day–it would actually have taken the book to a higher level.

Yesterday, on Japan TV, [NHK news channel] I came across a one hour class on Chopin’s mazurkas, recorded at the Royal Academy of Music. The teacher, an attractive young woman, whose name I did not get, was playing extracts from the mazurkas on a Steinway grand piano. She was an expert pianist, and held the students spellbound with her playing and her commentary and explanations.

And as I had just been thinking about the division of countries, my thoughts turned not just to Chopin and his music, but to the history of Poland, that country so often partitioned.  Chopin was born on 4 March  1810, in Żelazowa Wola, near Warsaw. His father was a French immigrant and his mother, Polish. What was the situation in Warsaw at the time?

By 1795 Poland had ceased to exist after three partitions led to its occupation by Prussia, Russia, and Austria. Napoleon, though, brought hope to Poland, promising to revive the nation. After his defeat, by the Congress of Vienna in 1815, a new small kindom of Poland was created, out of part of the duchy of Warsaw, with the Russian emperor as the king. Krakow became a city republic, but the rest of Poland was again divided between Russia, Austria and Prussia.

Poland began a movement for independence, but after a brief success, was taken over again by Russia.  Independence came again only after World War I.

Chopin moved to Vienna in 1829, and to Paris in 1831, but his heart was with Poland, and his compositions were influenced by the music of Poland. With the revolutions in Europe in 1848, he went to Scotland and England, but returned to Paris, where he died on 17 October 1849, of tuberculosis. In this short life he composed 55 mazurkas, 27 études, 24 preludes, 19 nocturnes, 13 polonaises,  3 piano sonatas and some concertos.

Another later great Polish pianist, Ignace Paderewski, was valued so highly, that he even became the prime minister for a short time in the newly independent Poland!