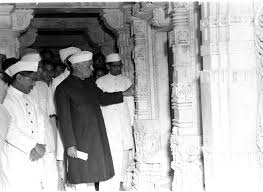 Jawaharlal Nehru, India’s first prime minister, in 1958. I had met him on his visit to Mt Abu at this time–and presented him flowers. I was six years old.

Today is his birth anniversary, also celebrated as Children’s Day.

‘Every country has a Children’s Day, to celebrate the innocence and courage of  childhood, and to remind one to work for the welfare of children. India’s Children’s Day  is observed every year on 14 November, the birthday of India’s first prime minister, Jawaharlal Nehru. He was known for his love for children. This day was chosen in 1952. Earlier, it  was known as Flower Day, and celebrated  on 5 November, 1948. ‘ [From my book, India at 70].

Nehru, to me, was India’s best prime minister, so well read that he could write on world history in jail without access to relevant sources. He composed his speeches himself, and was a great speaker. He had a world vision, initiating the non-aligned movement. He made India a secular and democratic country, and if we are still a democracy today, it owes a lot to him.